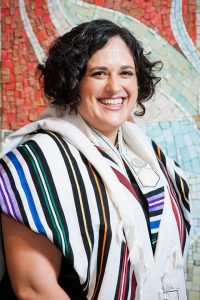 Rabbi Shelley Goldman is a teacher, community organizer and social justice activist. Her favorite way to connect with other people and The Divine is through song. Born and raised in Chicago she grew up as a proud member of Habonim Dror, a Jewish youth movement. She loves exploring the songs and stories of our people with groups of eager learners of all ages. Before coming to Kesher Israel, she served as the rabbi of Dor Hadash: Pittsburgh’s Reconstructionist Community, one of the three congregations that met in the Tree of Life building that was attacked on October 27, 2018.

Rabbi Goldman has lived in Israel three different times: as a kibbutz volunteer after high school, as a Hebrew language learner and student of peace and justice, and as a rabbinical student and emerging Jewish professional. She began her rabbinic career as assistant rabbi at a dual affiliated Conservative and Reconstructionist congregation in Indianapolis, IN. A graduate of Oberlin College, she was ordained in 2016 by the Reconstructionist Rabbinical College.

She lives in West Chester with her lawfully wedded partner, two young sons, and goldendoodle.

Rachel Mussaf (Muh-suf) serves as the Education Director and is an integral part of the David Ari and Michael Eric Zukin Religious School.  Rachel graduated from the University of Arizona in 2000 with a bachelor’s degree in Dramatic Theory and received her Elementary Education Teaching certification from West Chester University in 2005.  Shortly after graduating, Rachel began teaching Hebrew School at Congregation Beth Shalom in Wilmington, DE and found her true passion!  Jewish Education is very important to Rachel and it shows in her dedication and creativity when working with Jewish children and their families.  In 2009, Rachel became the Assistant Director of Education at Congregation Beth Shalom and helped to grow their Hebrew School for 5 years.  In 2014, Rachel began working at Temple Beth El in Newark, DE as their Synagogue Administrator.  This position was all encompassing and taught Rachel many of the skills she holds today.  While at Temple Beth El, Rachel not only served as Administrator, but she was in charge of payroll/billing and served as the B’nai Mitzvah Coordinator as well.  In the Summer of 2017, Rachel was offered the Religious School Administrator position at Temple Beth El in addition to her other responsibilities.  Rachel was thrilled to be getting back into a school setting and creating new and unique programs for the families at TBE.  Over the course of her time within the Religious School, Rachel specialized in bringing new, creative and innovative programs to the students and families at TBE.  In addition to her full-time positions, Rachel has also been a private Hebrew and B’nai Mitzvah tutor since 2014.

Rachel and her husband Josh live in Claymont, Delaware with their 2 children, Jenna (10) and Henry (8).  Rachel’s family have been members at Congregation Beth Shalom in Wilmington, DE since 2007.

Gail DeMarco began in 1998 as a co-director and teacher at Kesher Israel Preschool / Kindergarten.  She has been working in the field of Early Childhood Education since 1988.  Gail works mostly in an administrative capacity with teachers and families, as well as teaching a toddler class.  She also leads the Tot Shabbat Service with Rohna Paskow.

Gail earned her Early Childhood Education degree from Temple University in 1982 and received her Core Director’s Certificate in 2006.  Gail is the recipient of the Ateret Kavod award for an outstanding and well-rounded Jewish early childhood program.  Gail continues her education through various workshops and with the Director’s Council at Jewish Learning Venture.  She and Rohna continually develop curriculum at the preschool and kindergarten to remain current with the Pennsylvania State Standards and to make sure they are involved with the best and most current early childhood practices.

Gail has a fulfilling home life as well.  She shares thirty-five years of marriage with Howard and has two young adult children, Bryan, Lauren and her husband Phil and beautiful grandson, Owen.  She loves vacations (especially going to the beach), trying new restaurants and spending time with family and friends!

Marci Rinaudo became a permanent member of the Kesher Israel Office Staff in 2015. She runs the synagogue office, provides support for the synagogue and religious school, assists in programming and works with our families to coordinate all aspects of the Bar/Bat Mitzvah process. Marci has taught in the Preschool and the Religious School and was the Bnai Mitzvah Instructor for 10 years.

Marci and her husband Rick are members of Kesher Israel and  live in West Chester with their wonderful children Julia and Harry.